This trip was another join exploration with my friend Florian over at abandonedkansai.com. We had two sites in mind for today’s exploration, firstly an old love hotel, and a return trip to Biwa Tower (which proved to be much more interesting than my first trip there).

For those of you who don’t know about love hotels, they are exactly what they sound like hotels where you go to get a bit of love – though you have to take your own partner with you. They aren’t brothels, just cheap hotels with rooms rented by the hour or for overnight stays. They range from quite elegant to ferociously tacky, and from unremarkably bland to truly bizarre. As a haikyo type ‘the love hotel’ was high on my list of must sees.

Just a quick glance at the location of this place, by a heavily used roadside and sandwiched between two industrial looking  sites, it’s no wonder it went out of business. The layout is quite typical of many love hotels, a discreet parking place with direct access to the room with no need to go past a reception (rooms are usually paid for via an automatic machine and in many places the doors lock automatically until payment is made to stop people from just having fun and leaving). This was one long low building with seven car ports.

Although each room is a self-contained unit each of them was open from either the front or back. The first room we entered (from the rear) had no floor, just a couple of planks over a pool of ground water (add damp to the list of reasons this place closed down).  This didn’t bode well, the room had almost disintegrated with rot and the smell of mould hung in the air.

Heading deeper in though it soon became apparent that the level of rot really differed from room to room, and whilst some were in a state of total collapse others were fairly well-preserved.

A lot of the rooms still retained some quite typical love hotel features, such as mirrored walls and ceilings. A couple of rooms even had pink plush wallpaper and oddly vaginal door frames.

Most of the electronics had long since been pillaged though, there was no sign of the sex toy vending machines that are a common sight in love hotels. However, probably due to its size and weight, the jukebox had been left in most of the rooms. Each one had a different design, my favorite was this part art deco, part 60’s psychedelia model.

The top panel had been removed and every disc that could be pulled out had been, just one or two remained still jammed in place.

In case you’re wondering about the play list, among the english names we could see Elvis, Billy Joel, Barbara Streisand and Oliva Newton-John – if music be the food of love, then we have another reason why this place closed down, but this was still one of the nicer touches here.

Moving in and out of the various rooms proved to be equally entertaining, difficult and worrying. Although the door was always open, it wasn’t always on its hinges – which meant holding the door into its frame with one hand an opening it with another.

The more we moved around though the more it became apparent that each room had its own ‘flavour’. Although similar in layout the decor differed quite a lot with wallpapers ranging from cityscapes to forests. 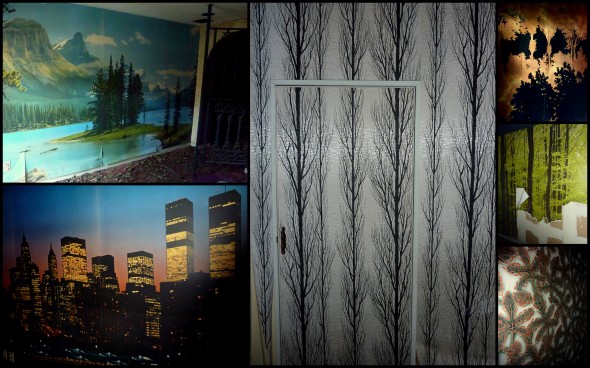 Two bathrooms even had quite impressive mosaics embedded into their walls. 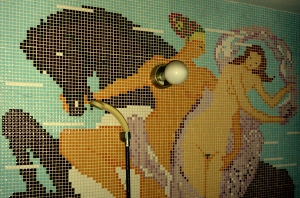 If you click on the right hand picture and enlarge it to full size, and you can see one small point that made me laugh – a single red tile at the bottom of her small pubic triangle. Now that’s detail.

All that remained now was to scout around the outside a bit.

There were a couple of not so impressive out buildings (one of which had that staple of haikyo photography, a nice overgrown chair) and there were a few things like the pricing boards and some quite nice plates left on the floor wrapped in newspaper.

Overall, I have mixed feelings about this site. I can officially checked off love hotels from my list of haikyo types I want to see, but I don’t feel it fulfilled my expectations of a love hotel haikyo – still that’s part of the joy of haikyo exploration, you never know just what you’re going to get.

This entry was posted on February 3, 2011 by dkjm74. It was filed under Haikyo and was tagged with abandoned, building, Haikyo, Japan, jukebox, love hotel, rotting, Urban exploration, urbex.