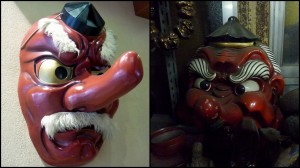 Tengu masks, like these, are still quite a common sight around Japan, particularly in the more mountainous regions where the Tengu clans are believed to live. Even the white robes and small black hats worn by many Tengu are based on the typical clothing worn by practitioners of Shugendo (an ancient religion that grew out of a form of Shinto mountain worship and later adopted elements of Taoism and Buddhism). Though this garb may well have been adopted by the Tengu as their image became less demonic and more holy, it certainly lends an air of gravitas and learning to the wearer.

Yet, by comparison, in the folk tradition the Tengu is often portrayed as a vain and quite foolish creature, typical stories involve a Tengu being duped into giving up a magical artefact or unwittingly doing great favours for humans.

For example, in one story a small child fools a Tengu into thinking a simple piece of bamboo is a magical telescope that can see over any distance. The naïve curious Tengu trades his magical cloak of invisibility for the bamboo. The invisible child then runs amok in a local village before finally getting caught. 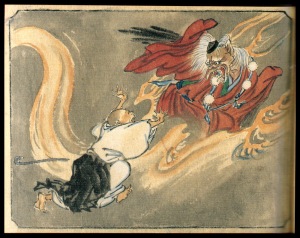 The Tengu wasn’t always the one being deceived however, and numerous stories show Tengu themselves as great tricksters.  In fact most early Tengu brushes with religion were as foils for the priests and monks who were a favourite target for Tengu tricks. The

Tengu themselves were often represented as the ghosts of priests who had fallen from the righteous path and now sought to trouble and humiliate those who remained pious.

Teleportation, kidnap, possession of women with intent to seduce, theft, creating false visions of Buddha, nothing was beneath these early Tengu.

In the 1300s the epic Japanese text ‘The tale of Heike’ includes a detailed and quite complex description of Tengu hierarchy. Tengu are all born from the spirits of the dead, they are the ghosts of priests, monks, nuns and ordinary men and women. They all have two qualities in common though, in life they were proud of the point of it becoming a sin, yet they were also followers of Buddhism. As such their pride denied their spirits access to heaven, whilst their faith kept them from hell. ‘The tale of Heike’ also introduced a radical notion that not all Tengu were equal, the red skinned, long-nosed Tengu were of a higher class born of born of wise men and scholars and were known as Daitengu (Great Tengu) whilst other more ignorant souls became Kotengu (Lesser Tengu) – maybe this explains the more foolish Tengu of the folk stories, perhaps a Kotengu is easier to dupe than a Daitengu.

The Kotengu is often shown in a very different form from the Daitengu as well. In many depictions the Kotengu is shown in a bird like form with a beak in place of the long nose. In this form they are often referred to as Karasutengu (Crow Tengu). Karasutengu are perhaps the lowest order of Tengu, and are perhaps the most prevalent and mischievous.  They are undoubtedly responsible for the early bed press the Tengu received, and they are still considered untrustworthy and dangerous to this day.

This new understanding of the distinct classes of Tengu allowed the more reclusive Daitengu to distance themselves from the image of their more rambunctious underlings however. A Daitengu may still play a trick on a wayward traveller in their mountains, but there is usually a moral point to be learned through the ordeal. Self importance and pride, the very traits that denied the Tengu heaven, are frowned on and the proud man coming up against Daitengu may well find himself may well find himself suddenly transported to a from the mountain top to a city centre – naked and a laughing-stock.

Paradoxically the most Tengu are still afflicted with great pride, and during the 1400s they became renowned for their mastery of martial arts, swordsmanship and military tactics. Tengu delight in showing off these skills and to this day a Japanese show-off is said to ‘Tengu ni naru’ (become a Tengu). Many great swordsmen, samurai and (it has been suggested) the leaders of the mountain ninja clans were all trained by Tengu in the arts of war.

Perhaps the most famous student to a Tengu teacher is Minamoto no Yoshitsune, who predates this trend by a couple of hundred years. This famed general (1159-1189) was born in blood, his father and two elder brothers were all killed in the 1159 Heiji rebellion, assassinated by the Taira clan. The infant Yoshimoto, then known as Ushiwaka, was spared on one condition, that he was put into the care of Kurama Temple (a place long associated with Shugendo religion) and raised as a mountain monk. There was however one big flaw in this plan, Mount Kurama is the home of Soujoubou, the king of all Tengu.

Soujoubou trained the young boy and in doing so created a legend, a great warrior and a new-found respect for all Tengu. Yoshitsune went on to have a distinguished military career and, despite dying aged only thirty years old at the siege of Koromogawa, he remains a popular figure to this day.

Here are several traditional prints showing him training under his Tengu master. 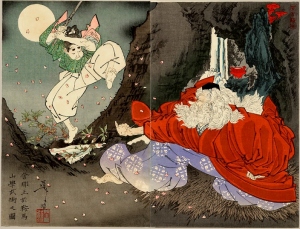 The modern-day Tengu is an amalgamation of all the previous guises though they are now mostly seen a guardians of the mountains.

They may be mischievous, foolish, and a little too full of themselves at times, but generally they are treated with respect and even revered as gods in some areas.

The mountains around Shiga Ken, where I live, are still believed to an area rife with Tengu activity – as this wonderful onsen building in Kutsuki shows.

And, if bathing in a Tengu’s mouth doesn’t impress you, I finally had the crowning honour of meeting a Tengu ‘in person’ earlier this month at Inuyama festival. 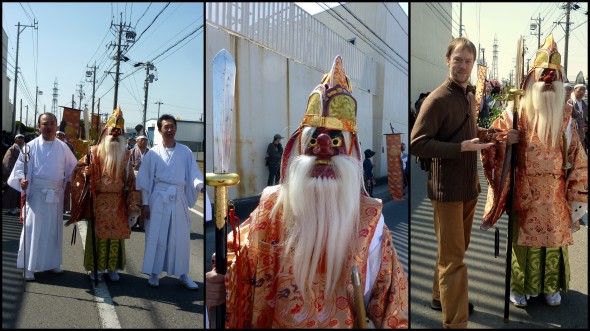 This entry was posted on March 31, 2011 by dkjm74. It was filed under Yokai and was tagged with folklore, Japan, kyoto, long nose, Minamoto no Yoshitsune, Mount Kurama, shiga, spirit, Sōjōbō, Tengu, yokai, Yoshitsune.