My original Kappa post is by far the most viewed post on this blog  – so I thought I’d do a follow up for all you Kappa fans and let you know more about everybody’s favorite Japanese water imp. So today I’m going to share a whole host of interesting Kappa images, links and suggested viewing with you all.

I promised a follow up a long time ago when I was about to depart on a quest to try and track down a mummified Kappa in Osaka. So that’s where we’ll pick up today.

END_OF_DOCUMENT_TOKEN_TO_BE_REPLACED 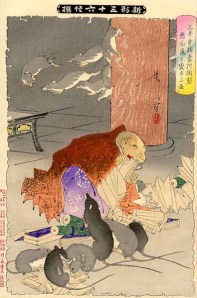 END_OF_DOCUMENT_TOKEN_TO_BE_REPLACED

The Yokai Files – Oni and Setsubun

Today is the 1st of February which means in two days  it’ll be time for Setsubun. Setsubun is the day which marks the start of the new season, though the most significant of these is the spring setsubun (or Risshun).

The spring setsubun is a chance for a fresh start, much like New Year’s day it’s a chance to stop the bad and usher in the good. END_OF_DOCUMENT_TOKEN_TO_BE_REPLACED 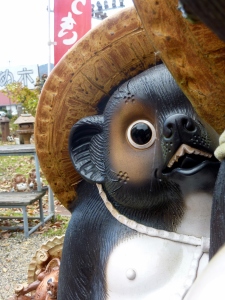 Despite having posted about Tanukis just recently a couple of things happened that made me want to do an update.

Firstly, I went to the town of Shigaraki – the spiritual home of the ceramic Tanuki, producing a staggering number of  Tanuki figures.

Secondly, I remembered another nice story about a ceramic Tanuki saving Kyoto, and that I had photos of the shrine dedicated to that Tanuki.

Lastly, an update will be a great excuse to show you all a rather famous Japanese TV commercial featuring those huge testicles.

So here you are, a second helping of Tanuki goodness.